I was feeling it BAD this morning. By this point, I knew my shoes were doing me more harm than good. I had started forming blistering bruises along the inside arch of both of my feet. It was going to be a rough day!

These are some selfies and photos from the first part of my hike that day… two are selfies, then the rest are reference points. 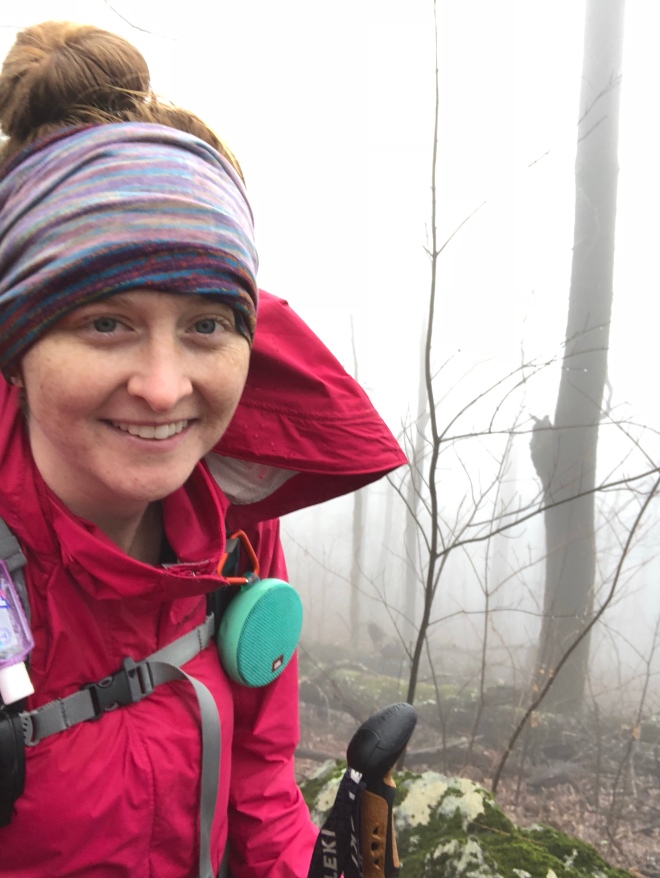 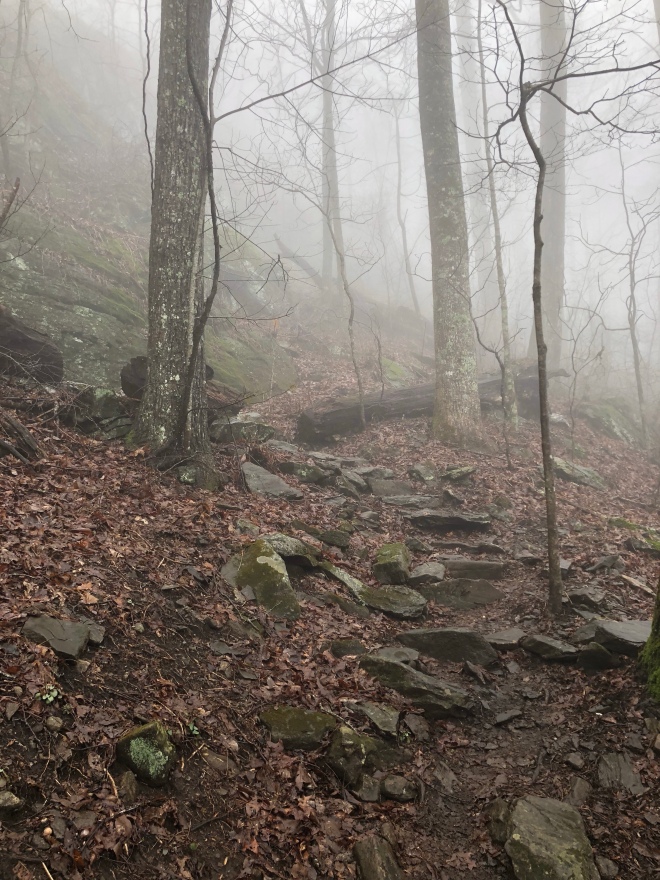 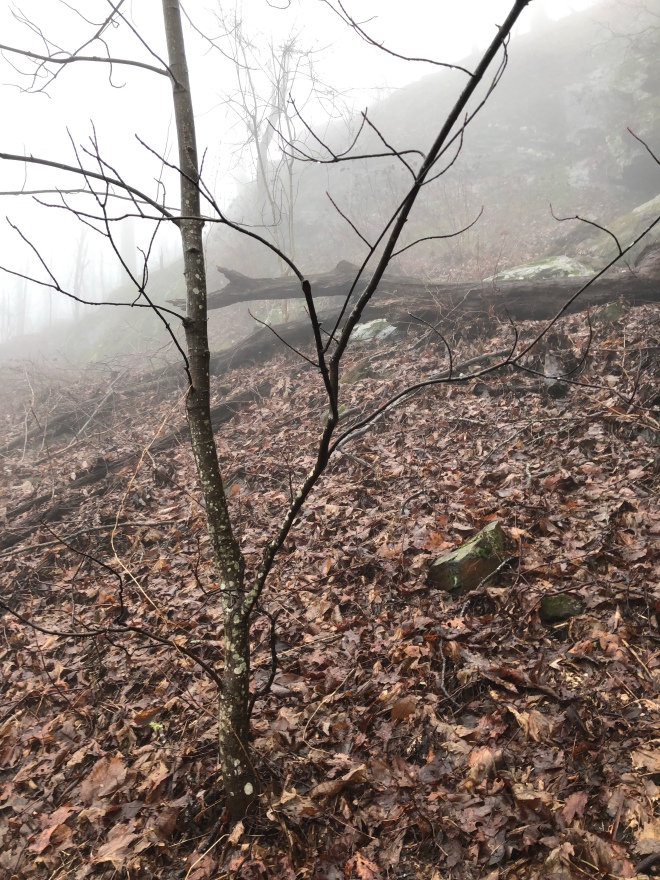 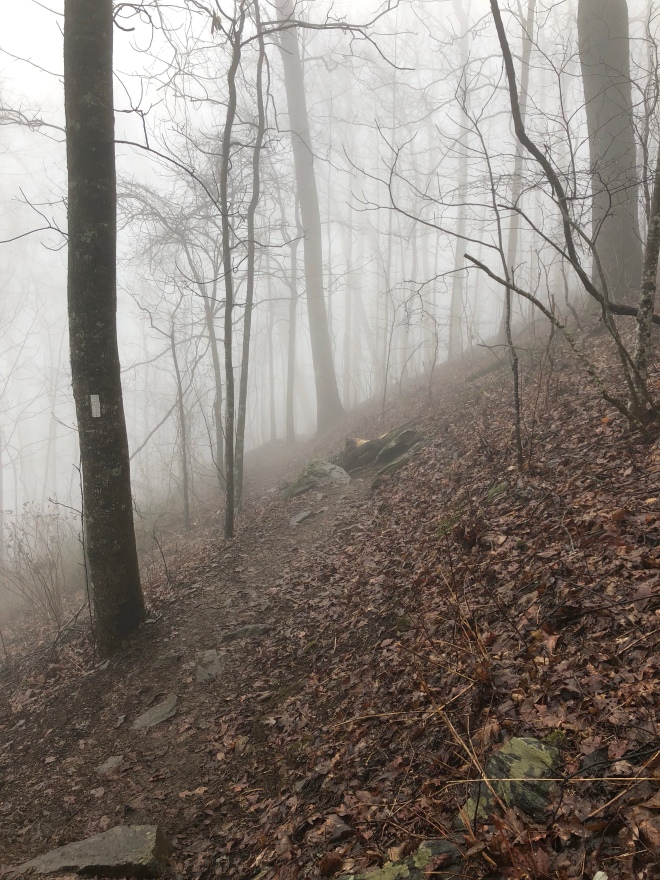 About an hour and 45 minutes later, I was on the backside of Sassafras Mountain. However, I needed to have a mini meltdown! I was hurting all over. I looked at my right hip bone and found a bruise from my pack. 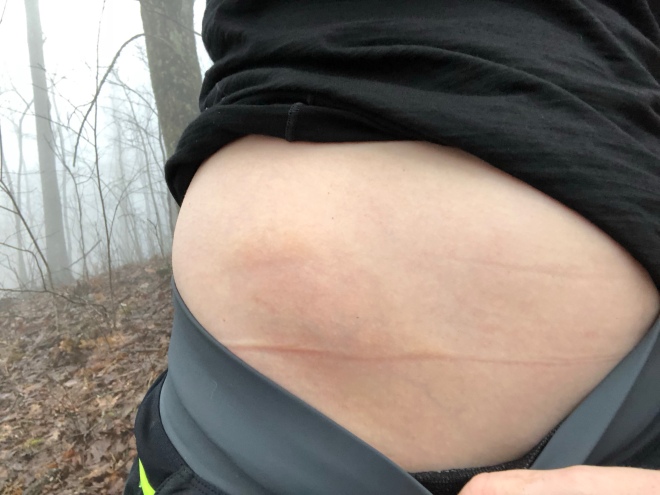 During my nice little stop, I took some more selfies… haha. 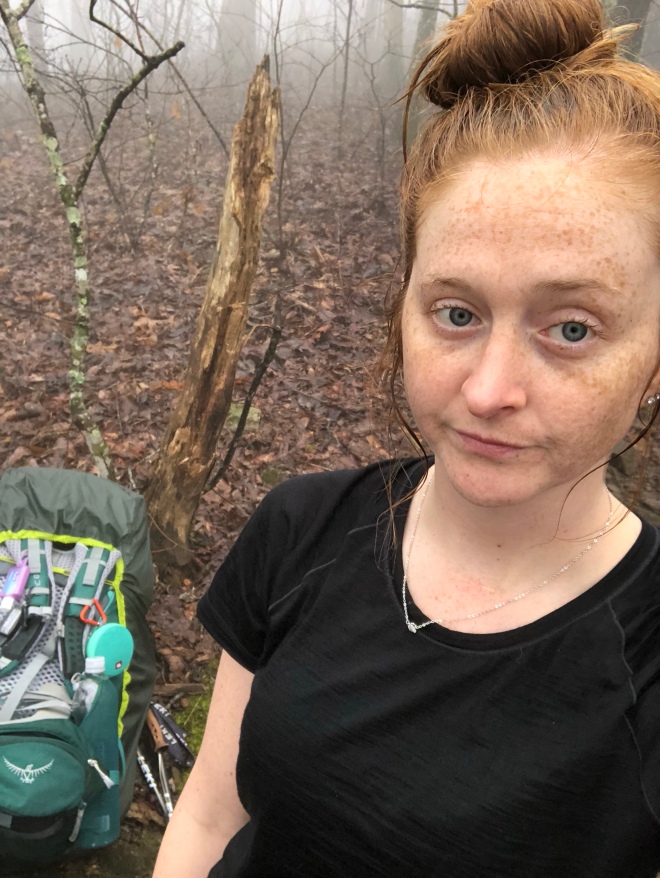 I was wet, Paxley was wet, everything inside of Paxley was wet. It was awful. And now, here is a picture of the perpetrators themselves! Kicking myself for getting these darn shoes now because as I’m writing this, I’m stuck at the Holiday Inn Express in Hiawassee trying to heal up. 😔

Okay, so I had finally had enough time to mini meltdown, and I was ready to get back to it! Thankfully this was my view *intense sarcasm*. 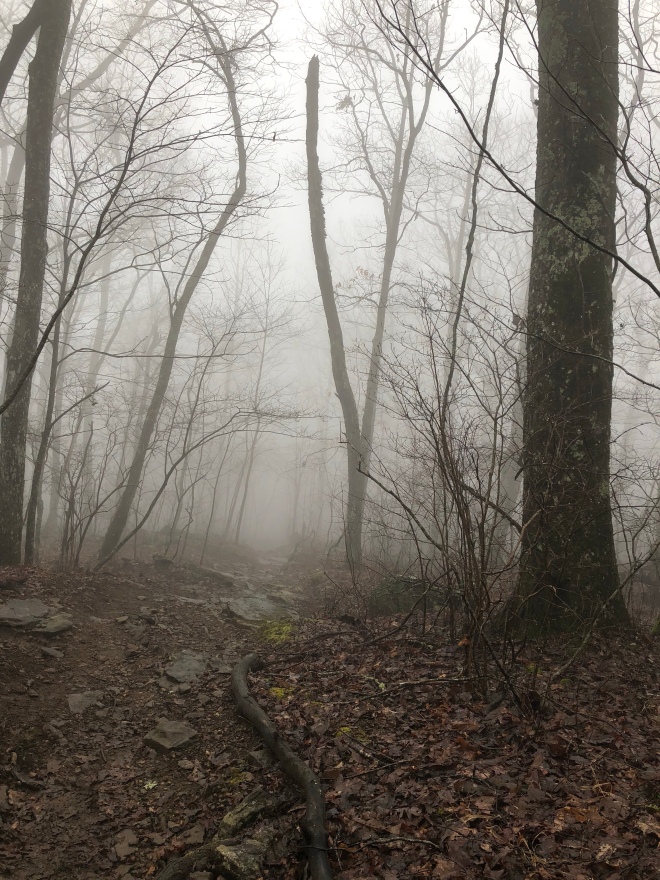 About an hour later, the most miraculous thing happened – the fog started going away! This was as I was walking around Justus Mountain. I’ll tell you, I needed this encouragement more than you’ll know. I haven’t had the thoughts of quitting, but my morale was getting low since I wasn’t able to get any rewards for my hard work. Honestly, I didn’t even expect it to clear up when it did, I was just going to keep trudging anyway. This was great though! 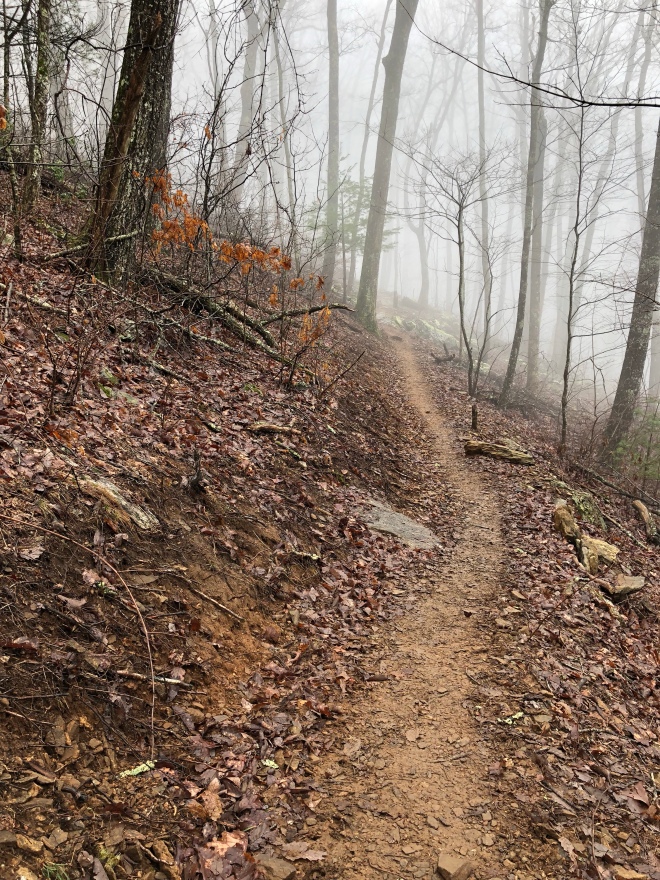 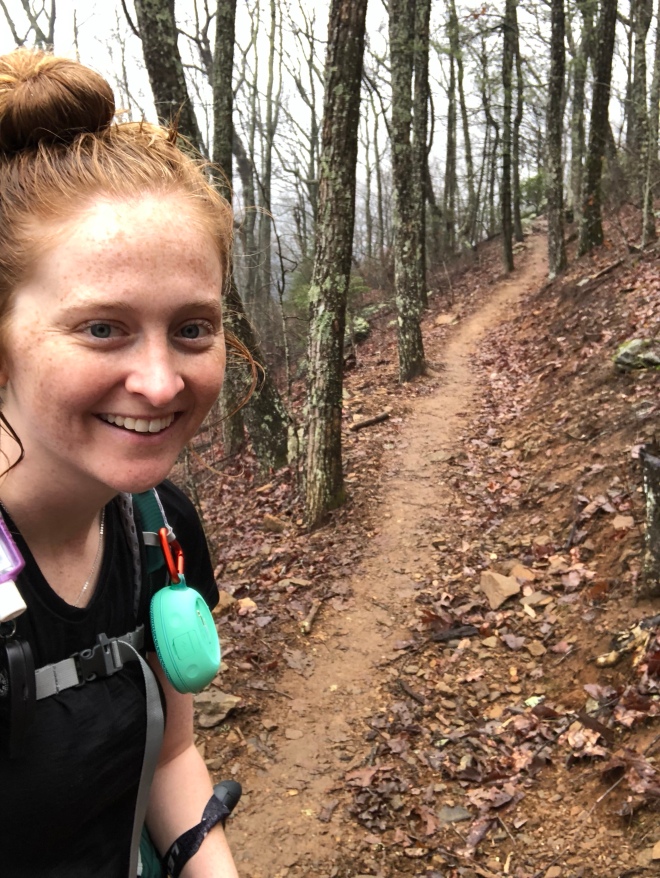 Look at those! Pictures without fog and mist! Beautiful! I felt like I could have kept on walking for miles in that clear air – which is good because that’s what I needed to do. I still had about 3 more hours of walking to get to Gooch Mtn Shelter.

My next obstacles were a couple of streams I had to ford. They were flowing good because of all of the rain Georgia has had. It’s likely not going to look like a lot in a photo, but it is actually scary to have to walk through them with 40 lbs on your back!

This is Justus Creek.

Then, I believe this one is Blackwell Creek. 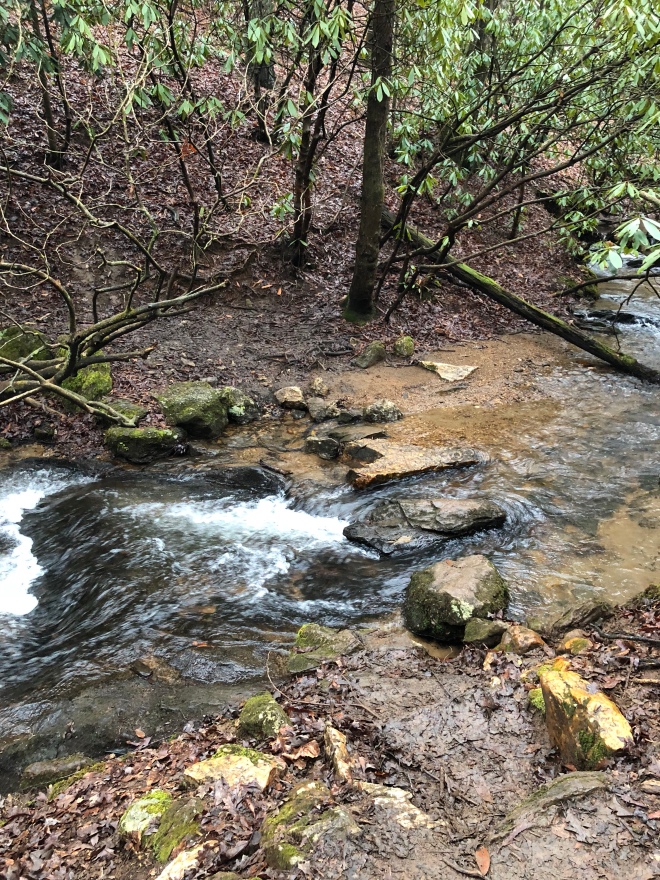 Between those two, I got a really nice picture of the AT and why it is called “the green tunnel”. Rhododendrons surround the trail and make a tunnel. It is so beautiful in person!

So that night, I did make it to Gooch Mtn Shelter, but I was barely hobbling in. My tramily really saw how bad it was that night. Thankfully Life Alert (Hiker BFF) saw me coming and ran out to greet me. They really didn’t think I was going to make it, and I can’t blame them. Looking back I have no idea how I made it.

Thanks for joining me on Expedition Elizabeth!